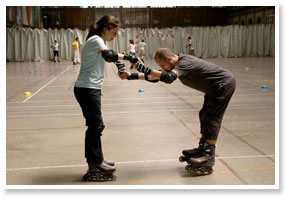 With the safety and privacy of our indoor facilities, all new skaters learn to turn, stop and move with ease.

When you control these basics skills you are ready to skate outside, where our team of instructors will teach you the advanced or very advanced techniques including downhill and stairs. to skate confidently on the streets

One of the best things about inline skating is that people of all ages can learn and enjoy it. Often seen as an activity only for young people or children, this is a totally unrealistic idea. Inline skating (or rollerblading) is suitable for all types of people as well as being highly recommended as a regular sport to keep physically and psychically fit.

In countries with a long tradition of ice skating such as Holland, Germany and Austria, it is common to see older people skating  on the streets. Of course it is not the same thing to learn when you’re a child as when you’re 50 years old, but learning to skate is possible as long as you’re willing to give it a try. 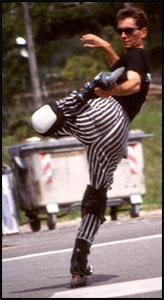 Enrico Perano, one of the best freestyle-figure skaters, is an example; he started skating when he was 34 years old, and 10 years later he has incredible skill and ability on wheels. (In June 2005 Enric Perano came to do a master class at the Official Inline Skating School and we got a chance to see what he was able to do in his mid 40’s).

Since then, at the Official Inline Skating we’ve managed to help lots of people get over their fear of skating, and with prudence and patience they ended up enjoying this great sport.

The inline skating program for adults includes all kinds of techniques to skate safely on the street. These techniques include all turns and stopping exercises that, for many years, helped thousands of students to become great urban skaters. At the same time that we assure your safety, we never forget that having fun is part of the learning process. That’s why many of our students repeat our courses year after year to improve their skating technique, to have fun on skates and also to keep fit.

This information box about the author only appears if the author has biographical information. Otherwise there is not author box shown. Follow YOOtheme on Twitter or read the blog.

Alex L
11:19 23 Feb 18
it's great! great team, location and schedules.I just wish prices for family members registered together on a bonus basis were more convenient... mum/dad with kids becomes pretty expensive. Could'nt they pay one association quote for all together and get 20 lesson flyers a bit cheaper? A suggestion.Greetings, A.read more